The store will not work correctly in the case when cookies are disabled.
Article Number
LXFIACGOA1HC
Author
Vlastimil FialaJan Kalendovsky 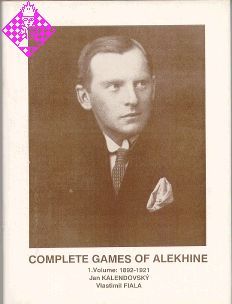 334 games, assiduously researched by authors Fiala and Kalendovsky, from the first part of Alekhine's life. Includes interesting biographical material about Alekhine's formative years in pre-revolutionary Russia, and an account of a legendary "life and death game" with Leon Trotsky.

INTRODUCTION Three years after the publication of the first volume of our history dealing with the life of one the most gifted worldclass chessplayers Alexander Alekhine who held the world championship title from 1927 to 1935 and again from 1935 to 1946, the reader will have a chance to delve into the pages of the second volume.

This volume describes the ups-and-downs of Alekhine`s chess fortunes in the period between 1921 and 1924, which was of the utmost importance in his life. Following Alekhine`s departure abroad in May 1921 and his decision to remain an émigré, the Russian master embarked on the anything but easy path of a professional chessplayer.

In 1922 he settled permanently in Paris where, a few years later, he received an official residence permit and, in the second half of 1927, was awarded French citizenship.

The period between 1921 - 1924 represents a total dedication to chessplaying. In this time span Alekhine played in 11 tournaments (at Triberg in 1921, Budapest in 1921, the Hague in 1921, Pistyan in 1922, London in 1922, Hastings in 1922, Vienna in 1922, Carlsbad in 1923, Margate in 1923, Portsmouth/Southsea in 1923, and New York in 1924), six chess matches (with Teichmann, Sämisch, Bogoljubow, Golmayo, Bernstein and Muffang) and gave several dozen simultaneous exhibitions in the Netherlands, France, Italy, Austria, Hungary, Germany, England, Scotland, Ireland, Switzerland, Belgium, Spain and Czechoslovakia.

He visited a number of other European countries where on occasion he played exhibition and consultative matches.

Aside from this tireless and often exhausting practical involvement with tournaments and matches, Alekhine embarked on an extremely busy career as a publicist, contributing chess analyses and commentaries to almost all principal European and American chess magazines (for example, to the Deutsche Schachzeitung , The British Chess Magazine , Shakhmaty v SSSR , Shakhovsky Glasnik , La Strategia ,American Chess Bulletin , etc.); neither did he shun publishing in the columns of papers in a number of European cities (for example, the Berliner Tageblatt , Berliner Lokal-Anzeiger , Nieuwe Rotterdamsche Courant , The Times , etc.).

In that period there also appeared Alekhine`s most famous tournament book covering theNew York Tournaments of 1924 . Chess fans were also able to familiarize themselves with a selection of his best games in My Best Games of Chess, 1908-1923 which remains a chess bestseller to the present day. Aside from these publications he contributed analyses of his games, thus co-authoring tournament books dealing with tournaments in the Hague in 1921, London in 1922, and Hastings in 1922.

We should not omit Alekhine`s role in propagating the art of chess, bringing it home to the broadest strata of public life. His tournament conceived on a all-inclusive and international scale betokened his incredible talents in blindfold matches with earned him twice the world record, first in New York in 1924, and second in Paris in 1925 on 28 chessboards.

Alekhine managed to stir interest even among people outside the chess establishment by his various and manysided talents in playing the game, his name appearing frequently on the frontpages of dailies of world renown. The gigantic battle-royal in the New York Tournament 1924 was followed with unfeigned interest and suspense by literally the entire world. Very few sportmen`s names of Alekhine`s, Capablanca`s or Lasker`s calibre became household words for the reader of dailies.

Due to the response of our readers and the advice voiced in reviews of the first volume we decided, in editing the second volume, to approach the chess activities and Alekhine`s personal life a more dynamic and universally conceived angle. The second volume offers, aside from well-known games, hundreds of others, which only appeared in dailies and hence are virtually inaccessible to the average reader of our time. In this publication we have also tried to bring together all Alekhine`s well-known and less well-known analyses from available publications, tournaments books, chess magazines and chess columns. We believe that these analyses have to this day lost none of their beauty and that, from the perspective of 70 years ago, will address every reader.

In conclusion, we should like to thank all our friends and co-workers, especially those who assisted us with gathering the necessary materials for the second volume and who gave honest support to our by no means easy labours. We want to specially acknowledge the help of the following people (in alphabetical order): Messrs. Rogelio Caparrós, Tony Gillam, Árpád Földeak, Ken Whyld, Edward Winter, etc. We should like to express also our special thanks to Professor Miroslav John Hannak, Dr. Michal Peprnik and to all of our translators for their meticulous and taxing translating job.

Our special thanks, too, go to the library employees of The Cleveland Public Library, The British Newspaper Library and The British Museum in London, The Dutch Royal Library in The Hague, The New York Public Library, The Library of Congress in Washington, The State Scientific Library in Brno, The State University Library in Prague, and to everyone else, who met with kind understanding our needs and requests, and without whose help this publication would not have seen the light of day.

Finally, we should like to express our gratitude to all our readers, who have been patiently awaiting the publication of the second volume, sharing our belief that it would be brought to a successful conclusion. The publication of the third volume of our history is planned for the end of 1996.

024 The Secret of Alekhine's Exercise Books

TOWARDS THE CHAMPION'S TITLE

AMONG THE WORLD ELITE

095 Masters' Tournaments in Stockholm and Vilnius 1912

ALEKHINE IN THE FIRST WORLD WAR