The store will not work correctly in the case when cookies are disabled.
Article Number
LGYANILADP1
Author
YiLun Yang

From the series »Yang Yilun`s« 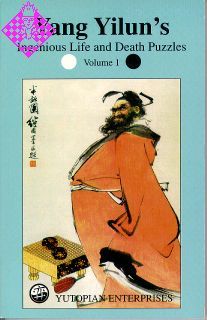 Yang Yilun 7 dan was born in Shanghai, China. He became a professional Go player at the age of 14, and has won a number of major tournaments, including the 1973 National Weiqi Tournament, and the 1985 Yunzu Title Match. Representing his hometown, Yang's Weiqi team was five-time champion in the Chinese Professional Team Tournament. In 1978, he began his coaching career by training the Shanghai professional Weiqi Team. He was responsible for the nurturing of many well-known players, including Cao Dayuan 9 dan, Rui Naiwei 9 dan, Chang Hao 7 dan, and Hua Xuamen 7 dan.

Since 1986, Mr. Yang has been teaching Go in the United States. He is the chief instructor of the American Go Institute in Los Angeles, California. Via the internet and by regular correspondences, he is the teacher (Sensei) of hundreds of Go students in the U.S., Canada, England, Denmark, Germany, Hong Kong, France, Poland, Singapore, and Taiwan. He is known as "yly" and "rabcat" on the Internet Go Server (IGS).

This book is a collection of some 200 life-and-death problems de-signed and developed by Sensei Yang. By studying these wonderful and intriguing puzzles one can greatly improve one's reading and fighting abilities, and also develop an appreciation for the beauty of the game. Moreover, one gets the opportunity to learn from one of the greatest and most well-respected masters in the Go world.

Ranked as the best player in the world in 1995, Ma Xiaochun has had a phenomenal career since turning professional just ten years ago. This book represents his first attempt at a major work of Go literature. It differs from the "usual" Go book in that it examines the application of ancient military maxims to the game. Through careful analysis of 36 complex middlegame positions, taken from actual professional games, Ma shows how to formulate a plan and translate the plan into action on the board.

At every turn, Ma demonstrates his phenomenal full-board vision Through each diagram, he develops the reader's appreciation of the relationship between local tactics and fullboard strategy. He shows how to formulate tactics based on strategy, as well as how to reap the ultimate reward by dogged pursuit of strategy in the face of tactical losses. His choice of a military classic as the basis of his lessons is unprecedented in Go literature. We have all mused about the relationship between Go and warfare, and some authors have written books describing warfare as an extension of Go. But here we have a work that directly interprets military principles into maxims for Go.

In recent years, due to several factors, I have gradually moved away from competing in tournaments. As a result, I have more time and energy available to me, and I have often thought about what I could do for the World-Wide Go Community.

I have heard that there's a very famous Go player in Japan. Through-out his long career, he forced himself to create one Life-and-Death puzzle each day. I was very moved by his dedication to the game of Go, and I began to follow in his footsteps and started to create my own puzzles.

In the beginning, even though it has cost me almost all my free time, my progress was very slow. Sometimes, even after I had put in a lot of effort, and several days had passed, I had failed to create anything of value. Moreover, sometimes my thoughts went in the completely wrong direction, and all those efforts were wasted. However, this hard work has also brought me tremendous happiness. For each time I successfully created a new life-and-death puzzle, I felt as if I had won an important match and I immersed myself completely in that wonderful feeling.

Now I have selected 200 of my puzzles and their solutions for this book, and for the enjoyment of my readers.

Based on the level of difficulty, I put the puzzles into four sections: Elementary, Junior, Senior and Advanced. Readers can base their studies on their own Go strength, and read the sections comparable to that strength or they can start with the Elementary section. Generally speaking, the Elementary and Junior sections are good for 1 to 5 kyu players, while the Senior and Advanced sections contain puzzles that might even be difficult for dan players to solve.

There are so many puzzles in this book, it is hard to avoid some inaccuracies here and there. Your critiques and corrections are sincerely appreciated.

Special thanks go to comrade Mr. Guo-Liang Lui for proofreading.