The store will not work correctly in the case when cookies are disabled.
Article Number
LXKINLAGOCTK
Author
Gabriel VelascoTaylor Kingston

The Life and Games of Carlos Torre (pb) 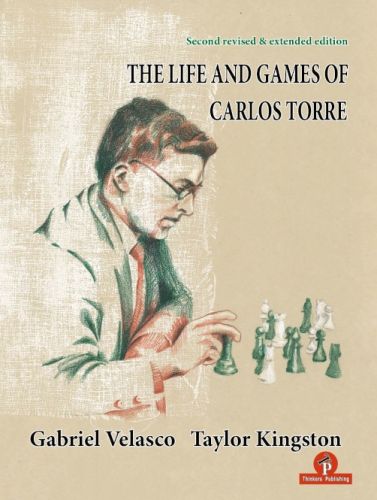 Here is what has been added to this edition:

More accurate and more extensive annotations, computer-assisted. Every game has been examined under Stockfish 14, probably the best analytical engine available for home computers at this time. For the first edition we had only Fritz 4 and 5, which compare to Stockfish like a Model T Ford to a Ferrari, and many games were given no computer examination at all. Thus owners of the first edition will find most annotations here substantially different (and substantially better). However, many general assessments and heuristic notes proved valid and have been retained.Torre’s own annotations to several games have been unearthed and added.

013 Preface to this Second Edition

515 Chapter VI - A Clash of Opposites

543 Chapter VIII - Others' Games from the 1926 Mexican Championship