The store will not work correctly in the case when cookies are disabled.
Article Number
SCODAVTQGDEV
Author
Nigel Davies 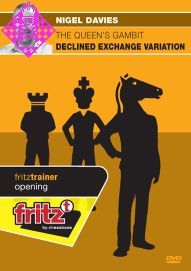 The Queen's Gambit Declined Exchange Variation is one of the most important opening systems, having been played by most of the great players in history and from both sides of the board. The most outstanding specialists in this method of play include Garry Kasparov, Mikhail Botvinnik and Samuel Reshevsky whilst the Black side has been championed by such notables as Anatoly Karpov, Boris Spassky and Paul Keres. It is truly an opening of champions. Characterised by an early resolution of central tension, the asymmetrical pawn structure leads to a variety of plans and ideas for both sides. One of the most traditionalstrategies for White is the minority attack which attempts to extend White's influence along the half open c-file. There are also sharper plans available such as an advance of White's central pawn majority or even castling long and going for a pawn storm on the kingside. On this DVD Nigel Davies explains these strategies in detail through a series of instructive games. Armed with thisunderstanding the viewer will then be able to play this opening with eithercolour and always know what plans are available. Davies also shows how these plans can be used in openings with a similar pawn structure such as the Gruenfeld Defence and Caro-Kann, making this DVD valuable for those who would like to improve their knowledge of chess strategy in general. Video running time: 4 hours.

Nigel Davies has been an International Grandmaster since 1993 and is a former British Open Quickplay and U21 Champion. He has played the f4 Sicilian with both colours and was involved in developing the theory of the 2.f4 d5 gambit variation.