From the series »The Modern Endgame Manual« 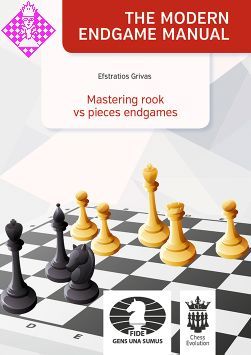 The authors aim for very understandable explanations of every endgame position in each book.

which are of course rook endings. The main concept of each book is to provide theoretical knowledge which can be used in practical games. It means the focus of the books will be on positions which are the most likely to occur - and the practical playing of them. That’s why you will firstly meet the theoretical part, and secondly the practical examples of how games actually continued in a particular endgame. Yes, you’re right, you won’t find too many very complicated studies, stunning manouevres or rarely-appearing positions - and there is a simple reason why not!

How often do we see positions, for example two knights vs pawn where one knight is blocking the pawn and the other one tries to get the king to the corner before releasing the second knight for the mate? Or constellations with crazy material on the board? This might happen in one game out of 100! You could spend hundreds of hours working on something that might bring you “only” a single point more out of 100 games!

As you may already be aware, the publishing house ‘Chess Evolution’ is printing a series called ‘The Modern Endgame Manual’ which will consist primarily of eight books and will deal with everything concerning the endgame. I was surprisingly pleased when the Editor in Chief, GM Arkadij Naiditsch, asked me to write two of the eight books. But I was a bit ‘disappointed’ when it was made clear to me that I would have to deal with a quite difficult subject: Rook vs Pieces Endgames! But OK, nothing is really difficult nowadays. The modern author has at his disposal powerful databases, tablebases, analysed material, books and - by adding his own knowledge he will always find what he is looking for! The endgame is a phase of the game that has been extensively analysed and reduced to concrete conclusions, although in nearly all the books I know of, very little space is dedicated to the queen vs pieces endgame subject. I think this is mainly because of space limitations and because it’s a difficult theme that doesn’t appear too interesting for readers. But a modern chess player cannot really choose what he likes or prefers - this has nothing to do with openings! Today we have shorter time-controls and there isn’t really enough time to dig around in the subtleties of each ending. You have to know and to repeat knowledge; don’t be carried away by the usual myth of the ‘chess talent’. As I have repeatedly written and proved, ‘talent is the excuse of the failed’. ‘Unfortunately’, the modern chess player is entitled and forced to work more than his predecessors. The modern chess trainer also needs to prepare more delicate themes, understand them and then teach them to his students as well. So, there is plenty of room for everything and for everybody who is thirsty for knowledge. Knowledge is the keyword, and knowledge is absorbed subconsciously; it is impossible to remember everything you study. So, it is highly important to work with good material and good trainers in order to improve towards the ‘Chess Olympus’. Nowadays the help of the Silicon Monster (chess analysis engines) is quite valuable, as it can save an author countless hours of analysis and checking. But still the role of the qualified trainer remains important; he knows where the truth is - he knows what to keep and what to throw away ...

I do not want to ‘hold a high nose’ and claim that everything I have written is perfect and completely sound; I am always aware of the surprise factor and I just try to write honestly and with responsibility. As an author, I feel that I should especially congratulate four important figures of our chess literature world: Alexander Baburin, Karsten Muller, John Nunn and Jan Timman. Dr. John Nunn was kind enough to permit me to publish his analysis of the game Piket-Nunn, Wijk aan Zee 1990 - I truly thank him!

Finally, I would like to thank three readers who each contributed valuable time and effort to check and correct my work:

Have a nice reading journey!